Guides: What are Aftermarket Upper Control Arms and When Do I Need Them?

What are Aftermarket Upper Control Arms and When Do I Need Them?

Anyone who spends more than 5 minutes on an offroad forum will find the topic of aftermarket control arms, also known as UCA, discussed quite a bit.  But you may wonder: what does an upper control arm do?

Upper control arms are found on independent front suspension (IFS) vehicles and generally connects the top of the spindle to the frame.  The UCA is generally not a load bearing piece of an IFS suspension; rather, its purpose is to guide your spindle in a pre-determined motion when your suspension cycles up or down.  Load is usually handled by the lower control arm, which connects to the lower portion of the spindle. 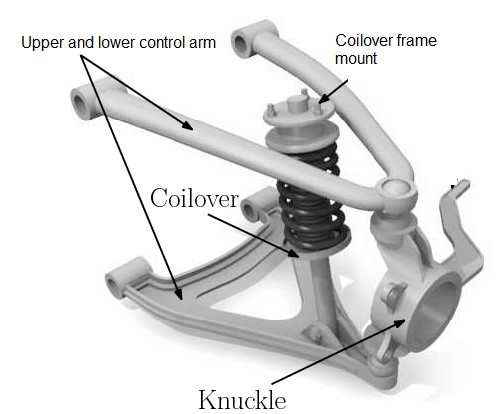 What makes an aftermarket UCA an upgrade over my factory arm?

There are 3 major differences between a factory UCA and an aftermarket UCA:

Even though the upper control arm may not support load there will still be a degree of forces transferred through the spindle into the upper arm.  A number of OE style arms are formed from sheet metal (for instance, in Nissan and Toyota applications).  Aftermarket arms are usually made from DOM tubing or they're forged in steel or aluminum rather than being formed in sheet metal.  Sheet metal arms are advantageous for a OE manufacturer, they can be mass produced in huge quantities quickly and inexpensively.  Aftermarket arms are fabricated in smaller batches and are generally more expensive due to the materials being used.  You'll notice the difference in cost if you look up your vehicle on Rockauto or other OE parts houses and compare to aftermarket arms.  Aftermarket options are significantly stronger than factory arms.

The pivot point, where the UCA meets with the spindle is also much stronger in aftermarket options. This pivot point takes shape in the form of a ball joint or uniball.  We generally prefer ball joints in most cases (especially if they're user-greasable), as the pivot point is booted to prevent the ingress of dust, dirt, and road salt.  They require less frequent service or maintenance.  Uniballs are generally found on high performance / racing applications and aren't a great option for daily-drivers or weekend-warrior type builds.  They have a shorter service life than ball joints and are known to be noisy as they wear through their teflon liner.

A common problem with factory upper control arms can be limited clearance at the coil bucket and at the spring.  This is an especially common problem in Nissan Frontier and Nissan Xterra applications and is commonly referred to as coil bucket contact (or CBC).  Aftermarket UCAs are designed to provide the clearances needed so you can beef up your suspension and not have to worry about your UCA contacting suspension components it shouldn't.

Most aftermarket arms come built with extra caster so when you beef up your suspension, you can keep your alignment in spec.  This is done by slightly altering the geomertry of the spindle.  Aftermarket options from Dirt King, for instance, have this correction statically integrated into the UCA and it is non-adjustable.  Aftermarket options from SPC are manufactured to allow for an alignment shop to adjust caster and camber by shifting the position of their unique ball joint design.

When do I need aftermarket Upper Control Arms?

The answer to this question ultimately comes down to how you chose to lift your vehicle.

If you lift your vehicle with lift springs or preload (for example, with Bilstein 5100 front struts or OME / Dobinsons front lift springs), your suspension will still cycle in the exact same range of motion.  This means that your full droop location and your maximum compression position will be the same.  Lift springs / preload simply make your vehicle settle at a different spot in your overall suspension stroke.

If you chose to lift your vehicle by increasing the extended length of your shock, your range of motion will change (for example, Radflo extended travel front coilovers or a Rough Country front strut spacer).  Lengthening your shock means you will have the same amount of travel, just moved down in position.  For instance, if your OEM shock is 18” extended length and 13” collapsed length and add a 1.5” tall spacer to it, your extended length is now 19.5” and your collapsed length will be 14.5”.  Overall stroke remains the same but requires your upper control arm to drop lower to compensate for the change in position / increased length.

For Nissan applications, people find their OEM arm will crash into the top of the coil bucket when using spacer lifts or extended travel lifts (coil bucket contact / CBC).  For Toyota applications, the arm can end up contacting the spring.  Both are not ideal and can be solved by installing aftermarket upper control arms.

What style of Aftermarket UCA is best for my application?

This style of arm is the most popular.  The balljoint is booted and greaseable which makes it very resilient to debris and poor weather.  The SPC implementation also has a high amount of adjustability, as previously mentioned.  The bushings at the frame mount also help to dampen vibration and prevent the driver from feeling every little bump and jolt.  Modern ball joints are extremely strong and if well maintained will be very resistant to failure.

Uniball Arms are very popular in racing applications because the heimed frame mounts allow more forces to be passed into the vehicle which allows the driver to be more in tune with what is happening at the tire.  At 100+ MPH in the desert this feedback is very valuable.   The uniball is also the arm of choice for racing applications because a uniball generally has a higher range of motion than balljoints.  This allows suspension travel to be pushed to greater degrees.  This is not a concern in non-racing applications however; your axles / cv's / lower ball joints will bind far before an aftermarket ball joint will.  The service interval for a uniball is more frequent than a booted ball joint.   Experts recommend servicing your Teflon lined uniball once every 3-4 oil changes.

Thanks for reading! We hope this was a good intro to upper control arms and how they work.  Below are links to some arms we offer on our site.